Should Skyscrapers be built in Hollywood?

The famous Capitol Records Building marks the location of an ongoing debate over skyscraper construction.  The Millennium Hollywood is a 1 billion dollar project which hopes to revitalize Hollywood.  Residents of the area are concerned about the traffic it will bring, which they say the area is not equipped to handle.  They have also challenged the project on its design, as it is composed of two skyscrapers.  The site sits on a fault, and it is a subjective call whether or not it is active.  The proposed buildings are set to be 35 and 39 storys, about half the size of the U.S. Bank Tower (the tallest building in Los Angeles) which is 73 stories.

A taller building is more flexible than a medium height building, allowing it to sway with the earthquake rather than rigidly staying in place and trying to withstand it.  A shorter building is also safer than a medium height building due to the low center of gravity.  So, the many medium buildings in Hollywood are actually less safe than the new development, assuming it has sound engineering.  The tall buildings swaying in the video below are from the Japan earthquake in 2011.

Which floor is safest to be on?

It can not be said for certain whether it is safer to be on a lower or a higher floor during an earthquake.  It depends on the waves of the earthquake how the building will be affected.  Sometimes the lower floors are squished as the building collapses down, but being on a higher floor means a larger distance to fall in the case of collapse.  The staircase is often a safe place to be, as they tend to be reinforced slightly more and are closed off from areas containing furniture and other things that might fall on someone. Survivors are more often the people who moved less that ten feet during the shaking.  In addition to falling objects, they avoid stampedes by finding the closest void to take cover and remaining there. 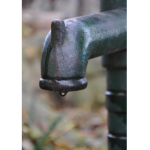 Effects of the “Big One” on Water
Will California Fall into the Ocean?